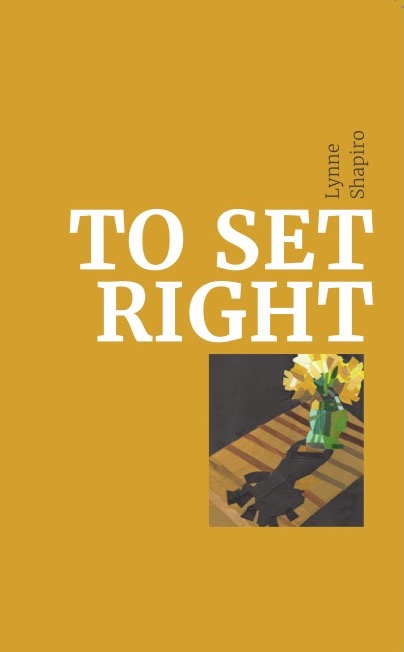 The architectural experiments of Lynne Shapiro's poems amplify the beating heart underneath their complex configurations.

"Lynne Shapiro's To Set Right is a stunning debut. Formally accomplished and playfully experimental, these poems play with the page and move the heart. Tending to wounds political, personal, and familial,To Set Right is rooted in an expansive vision of tikkun olam - the Jewish mandate to repair the world. Shapiro draws on multiple traditions, even finding an ars poetica in the words of 15th-century poet John Skelton: 'rectyfye and amende Thynges that are amys.' In this book, Shapiro's vision is profoundly ethical and beautifully realized. Her explorations of what it means to be a Jewish woman living in our new century deserves to find a wide readership."-Jason Schneiderman

"To Set Right is a portal, an entryway into the ways of reconciling ourselves to the world that oftentimes wishes to rend us apart through its violences and hatreds. It is politically and historically engaged, it has a heart that is communitarian in spirit, and it compellingly advocates that our global affections are what in the end will sustain us. Even as we feel broken at times, the poems remind us how we must continue to repair ourselves as if the repairing were a meditative way to reclaim our lost histories, lost connections. This small but indefatigable book looms large as an invitation to enter a way of living that has as its core healing and solace, a life that engenders and replenishes."-Gregory Djanikian

"The speaker of these poems is alive to loveliness and to horror, making hard sense of both with fine perception and a gift for imagery that will beguile readers to join her on her journeys."-Kathleen Ossip