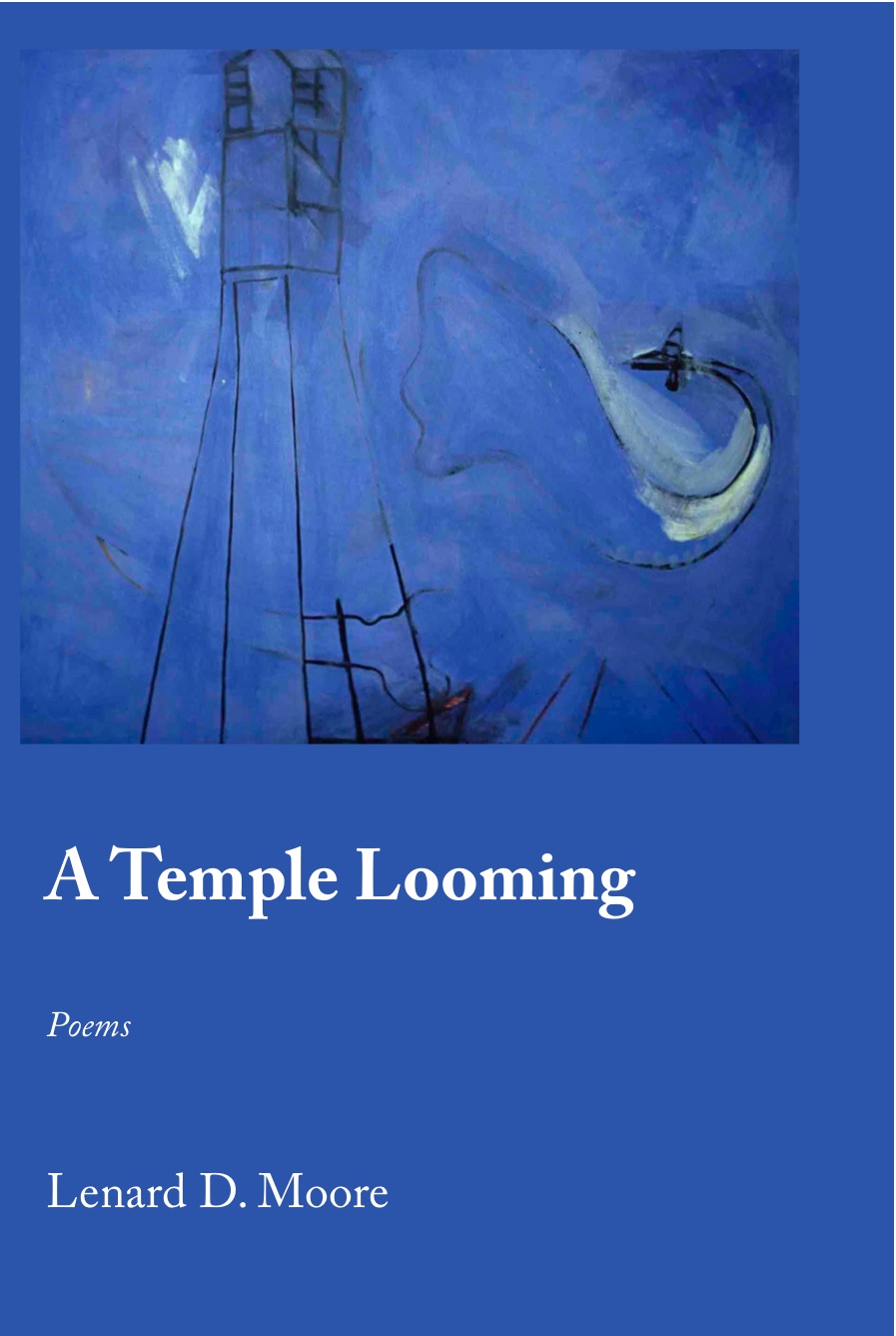 A Temple Looming by Lenard D. Moore is a series of portraits, painstakingly rendered, that capture the nuances of the African-Americans whose lives inspired them:

Splendid in uniform,
the barrel-straight stare
of his pure black face
shines like a bullet.

Imagine he’d not returned
from the Great War,
leaving a void in his family,
and in this picture.

Moore’s artistry preserves what might otherwise be lost: human lives, and their world.

A Temple Looming is a caring look into records of our African love, our will to life. Moore is ever the guardian, watching the darkening way, listening for our song.”—Afaa M. Weaver, Editor of OBSIDIAN II

How appropriate that the last word in the last line of the last poem in Lenard Moores new book, A Temple Looming, is ‘wake’! Throughout these beautifully rendered poems, the poet enters into such intense relationship with the old black and white photograph upon which they are based that his words wake their world up for us. Written in response to a 1995 request from the visual artist Sherman Jenkins to work on an interdisciplinary project, these poems reveal what might otherwise have remained closed to us. The women gazing from a photo album ‘stare sorrow out/to the bone/so bleak others feel it.’ Each of the figures in this book is caught ‘just right,/ in time’s lilac deepening/for claiming kin/ nearly forgotten.’ Moore’s new poems connect with the past in ways that both move and startle the reader with their vision.”—Kathryn Stripling Byer, author of Catching Light and North Carolina Poet Laureate

John Milton said poetry should be simple, sensuous, and impassioned. Cousin Lenard is surely in that tradition of prosody and hope. Read on.Michael S. Harper

Lenard D. Moore was born in Jacksonville, North Carolina. After graduating from high school and attending two years of college at Coastal Carolina Community College, he enlisted in the U.S. Army and had basic training at Fort Jackson in South Carolina. He later earned a B.A. (Magna Cum Laude) from Shaw University, and an M.A. in English and African American Literature from North Carolina A&T State University. Moore is a former Writer-in-Residence for the United Arts Council of Raleigh and Wake County. He is the founder and executive director of the Carolina African American Writers’ Collective and co-founder of the Washington Street Writers Group. He is President of the Haiku Society of America. He is the founding editor of The CAAWC Newsletter. He also is the executive chairman of the North Carolina Haiku Society. Moore has taught at Enloe High School, North Carolina A&T State University (Greensboro), North Carolina State University (Raleigh) and Shaw University, and now teaches at Mount Olive College, where he is an Assistant Professor of English and directs the MOC Literary Festival and advises The Trojan Voices (former known as The Olive Branch), the MOC literary journal. He also teaches poetry workshops in the public schools. He is the author of Desert Storm: A Brief History (1993), Forever Home (1992), and The Open Eye (1985). His poems have appeared in more than forty anthologies including The Garden Thrives (HarperCollins), Trouble The Water (Mentor Books), and The Haiku Anthology (Norton), and in the African American Review, Agni, Callaloo, Essence, The Midwest Quarterly, North Carolina Literary Review, Obsidian II, Poetry Canada Review, Black Arts Quarterly, Pembroke Magazine, Crab Orchard Review, Natural Bridge: A Journal of Contemporary Literature, and many other magazines. He has also had his essays and book reviews published in North Dakota Quarterly, Colorado Review, The News & Observer, St. Louis Post-Dispatch, The Pilot, Independent Weekly, and Black Issues Book Review. In 1996, Moore was awarded the Indies Arts Award. In 1997, he was awarded the Margaret Walker Creative Writing Award for poetry (College Language Association). In 1998, he was selected a Cave Canem Fellow for three years. In 1998, he was also awarded the Tar Heel of The Week Award. In 2006, he was awarded the Sam Ragan Fine Arts Award. He has also been nominated twice for the prestigious Pushcart Prize. In 2007, he was one of the three local organizers for the Haiku North America (HNA) 2007 Conference. He was also the publicity director of the Haiku North America (HNA) 2007 Conference. He lives with his wife in Raleigh, North Carolina.