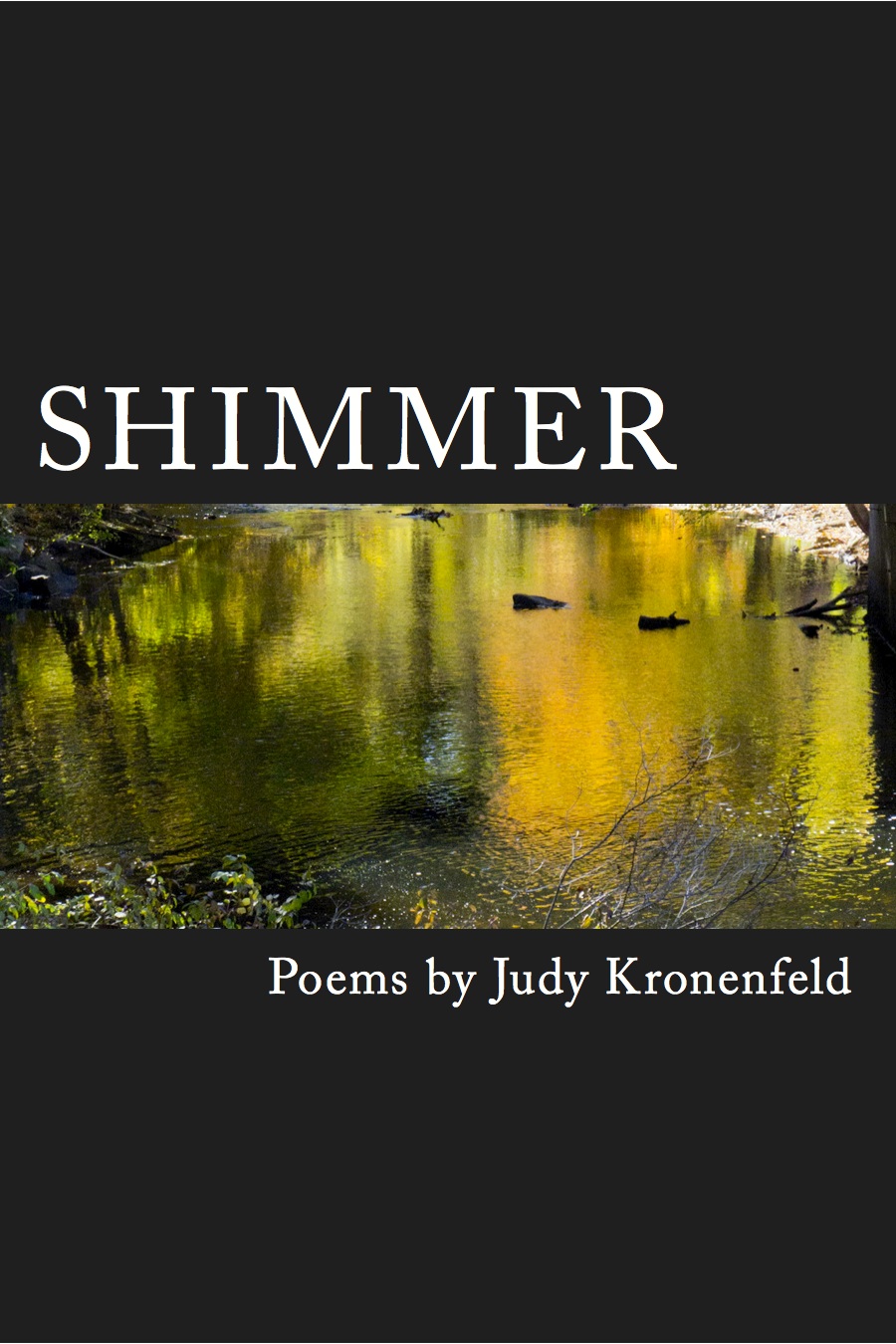 In Shimmer, Judy Kronenfeld’s careful attention to the details of the particular and domestic also throws off sparks from the larger cultural, political and historical currents charging those events.

“Judy Kronenfeld is a Southern Californian/Ex-New Yorker who’s crossed geographies and decades with her eyes and her heart open. In these fine poems she gives us the fruits of her journeying, some as close to home as the checkout line where we stand ‘ambivalent as mid-afternoon’ and some so globally empathetic that she can write about the mothers of ‘martyred’ babies on one side and soldiers on the other—war victims both: ‘The romance / of a meaningful death must be so brief.’ Kronenfeld’s nearly photographic eye knows that ‘night falls fast, / so fast, piling up in steep / soft drifts, canceling / cornice, column, piling up / in streets of ash and embers’ and yet her poems show us how careful attention continues to enrich us—‘You still see nothing / that is not there, / but now you sense everything / that is.’” —Deborah Bogen

“Judy Kronenfeld’s Shimmer radiates a fierce clarity of vision: the glow of the title is fed by intensities of memory and desire, love and rage. I’m deeply moved by these powerfully voiced poems that oscillate between evocations of an earlier world—the ‘crumbling Bronx,’ the ‘white noise’ of the city—and the new realm of age, loss, and reconciliation to which we all must come.”—Sandra M. Gilbert

“Light Lowering in Diminished Sevenths gives us Judy Kronenfeld at the height of her powers. In this generous collection of poems of memory and aging...Kronenfeld writes with that sensuous cherishing of the world savored only by those who sense who easy it is to lose….[Her] poems, even when they don’t mention light at all, are filled with clear air, clarity of thought, and the complementary radiances of remembrance and imagination.”—Molly Peacock

“…With consummate skill, capacious feeling, and keen-eyed intelligence,…Kronenfeld delves deeply into the greatest mysteries of the heart and spirit—wherein loss and longing, suffering and transcendence, coexist—and delivers, through the doubled lenses of wisdom and tenderness, a world shimmering beyond death’s doors.”—Maurya Simon

“Judy Kronenfeld’s poems celebrate the world. Her eye for detail, exact and first-hand, coupled with her daring and intelligent arrangement of events, accomplish what poems at their best should—they cherish and preserve our lives so that we might find meaning in them alone—if we have to—as they shine in memory….These poems…give us all some reprieve from loss as they master wonderfully ‘that ordinary happiness.’”—Christopher Buckley

Judy Kronenfeld was born in New York City and educated at Smith College and Stanford University, where she received a Ph.D. in English. She is the author of two previous collections of poetry, Shadow of Wings (Bellflower Press, 1991) and Light Lowering in Diminished Sevenths, winner of the 2007 Litchfield Review Poetry Book Prize (Litchfield Review Press, 2008), as well as two chapbooks, Disappeared Down Deep Wells and Still Falling(Inevitable Press, 2000) and Ghost Nurseries (Finishing Line, 2005). Her poems have appeared in many print and online journals including Adanna, American Poetry Journal, Calyx, Cimarron Review, Fox Chase Review, Innisfree Poetry Journal, Natural Bridge, Hiram Poetry Review, Passager, Poetry International, Spoon River Poetry Review, Stirring, Womens Review of Books and elsewhere as well as in a dozen and a half anthologies or text books, including Bear Flag Republic: Prose Poems and Poetics from California (Greenhouse Review Press/Alcatraz Editions, 2008), Beyond Forgetting: Poetry and Prose about Alzheimers Disease (Kent State University Press, 2009), and Love over 60: An Anthology of Women's Poems (Mayapple Press, 2010). Her stories and creative nonfiction have appeared in WomenWriters: A Zine, Literary Mama, Madison Review, Under the Sun and elsewhere. She is also the author of a book on Shakespeare, KING LEAR and the Naked Truth: Rethinking the Language of Religion and Resistance (Duke, 1998). Now Lecturer Emerita, Dept. of Creative Writing, University of California, Riverside, Judy Kronenfeld lives in Riverside with her anthropologist husband. They are the parents of a grown son and daughter.