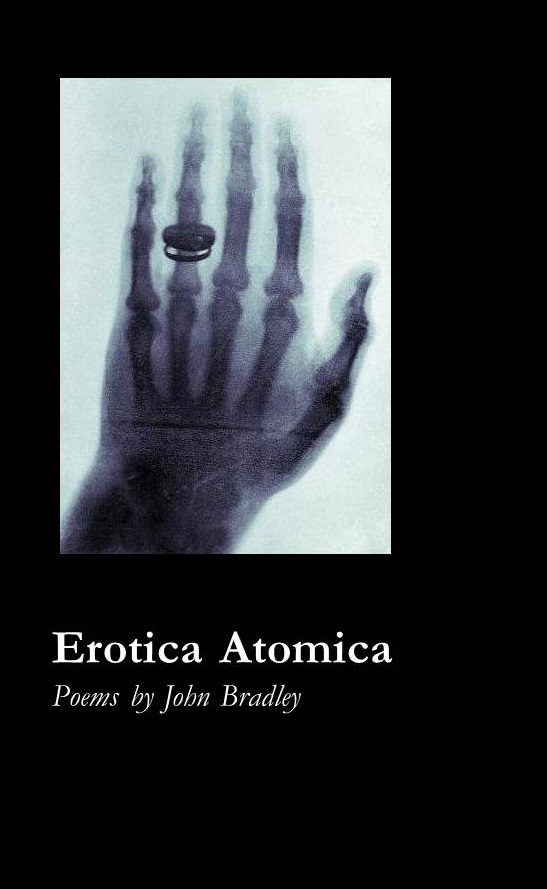 John Bradleys Erotica Atomica is a theater of the absurd, and the macbre: the worst weapons of the twentieth century examined in painstaking, mad detail, becoming surreal objects of our own folly.

"Some years ago, while teaching in Alabama, John Bradley discovered that half of the kids in his college class had never heard of Hiroshima, and didn't realize we were the first and (so far, thank God) the only nation to incinerate faraway cities with atom bombs. Since then, he's published two anthologizes and a fine collection-Terrestrial Music-to educate and bewilder, enchant and horrify readers who'd still rather not think about how our world changed in August, 1945. Erotica Atomica completes that project. Through a wide variety of formats-testimonies and odd questionnaires, ghostly stage parodies, official files-the voices in John's latest book keep tugging us back to that primal scene we have tried to repress ever since the instant thousands were vaporized. The poems here tease and amuse, and they terrify, taking us through every phase of creation, exaltation, accusation and recrimination, as though we were caught in a recurring dream that may take different twists and turns, but almost certainly leaves us in tears. It is a hard-headed, soft-hearted brilliant book only John could write. Once upon a time, somehow, some way, Samuel Beckett and Buster Keaton had a child. His name is John Bradley."-Joseph Gastiger, author of If You So Desire

"John Bradley's astonishing book of poems, Erotica Atomica, puts us in the middle of our casual (and therefore apocalyptic) relationship with the unthinkable horrors we have visited upon one another. This book fulfills Frank Kermode's claim, in The Sense of an Ending, that the apocalypse is immanent rather than imminent, happening continuously all around us. From Madame Curie's radioactive lab notes and Edison's radiation-maimed assistant to the victims of Hiroshima and Nagasaki, to Kitty Oppenheimer, Edward Teller, and Godzilla, Bradley creates a universe of characters, melted objects and flesh, testaments of guilt and self-justification, so complex and overwhelming that only surrealism can encompass it. The subject matter is familiar, but Bradley's range of poetic approaches, including his innovation of absurdist non-interactive interviews, is unique. His lyricism of human dissolution, both literal and figurative, will move readers in ways they have never before experienced." -Lawrence R. Smith, author of The Map of Who We Are